Compared to the previous version of Wreckage, the new formula has taken significant cuts. This pre workout used to be known for its DAA (d-aspartic acid) content. Now, that component is gone completely and many other ingredients are toned down.

With only ten ingredients, the new Wreckage is a lean and mean formula that focuses on direct caffeine energy alongside l-citrulline fueled pump. This isn’t a gentle pre workout, but it also will not produce crazy euphoria like other super-stims. Wreckage is somewhere in the middle where it will make you feel like wrecking the gym, without the comforts of other balanced energy profiles.

How to take Wreckage: Wreckage kicks in fast, but giving it some time to settle is worthwhile. Take Wreckage 20-35 minutes before lifting weights. Start with ½ serving if you’re not used to high caffeine pre workout supplements.

Wreckage is high energy, but it’s not gentle! Luckily, with a name like “wreckage”, it’s not like you don’t know what you are getting into in the first place. For that reason, we really can’t bash them. But man, this PWO could use some more l-theanine and a pinch of L-dopa.

Energy, check. Strength enhancements in any special way? Not so much, just a huge caffeine blast. Average for relatively high caffeine pre workouts, but powerful if you’re not used to them!

Again, nothing special for endurance besides a good circulatory dose of l-citrulline and accessory pump inducers.

Raw power without smoothing ingredients means the crash always comes like winter in game of thrones… This one isn’t as gentle as it could be.

Optimum Nutrition PRO PRE – Basically, this formula done right. The closest comparable hands down. But don’t let that stop you from trying out Wreckage if you have no alternatives!

The new Wreckage isn’t a breakthrough, it’s a cheapening. Just like what happened to the Assault formula last year… Dude Where’s My Car Part 2: “Hey, where’d all the ingredients go?”

We’re not impressed. Wreckage is made to be semi-acceptable to everyone, and therefore it is perfect to no one.

We miss the old Wreckage formula that had character.

Yeah, many people couldn’t stomach it, but to the few – it was pure gold. Where did that Musclepharm go? 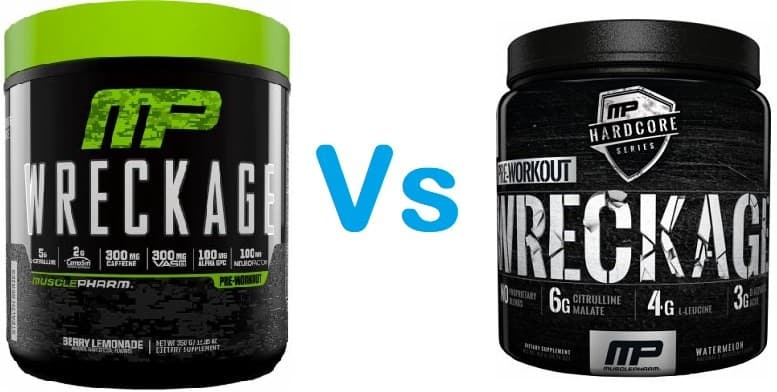 The pre workout Wreckage is the long anticipated addition made by the well-established supplement company Musclepharm. Musclepharm has been working on a hardcore legacy for quite some time, and the Hardcore Series which includes Wreckage is perfectly in line with that goal. 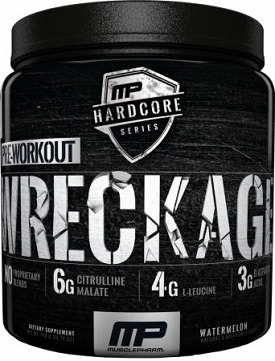 We had a blast reviewing Wreckage by Musclepharm, but we can’t stress this enough – this pre workout isn’t for beginners. At all. It’s simply too strong, and it will make a beginner sick more times than not. But, if you have taken your fair share of pre workouts and are looking for something even stronger, this may be your mark.

To explain Wreckage to you, we first want to go over the ingredients within Wreckage and what they mean. If you are in-tune with all of these ingredients, then you should be very confident about if this pre workout is meant for you by the end of this review. However, there are a few ingredients and ingredient quantities which may concern some. That’s why we want to make it clear here and now.

L-citrulline is the ‘new’ best pump ingredient in the weight lifting game. Through bodily processes, L-citrulline supplementation results in greater nitric oxide production than arginine, due to the massive amounts of supplemented arginine that gets degraded in your gut before it can go to work. Supplementing with L-citrulline gets around that harsh degrading step.

This has both pros and cons to it. As a pro, Musclepharm adds less L-citrulline malate to get the desired citrulline content which saves them money. However, malate is a known energy producer. So, in our opinion 8 grams of standard 1:1 L-citrulline Malate would have been the better way to go.

Of all BCAAs, Leucine has been scientifically proven to be the most anabolic, aka muscle growth promoting. Wreckage contains 4 whole grams of leucine, which is the most we have ever seen in a pre-workout. However, in a recent piece done by Jim Stoppani, Jim clearly stated that “Leucine is useless in a pre-workout without the other 3 branch chain amino acids”. Based on this, we recommend you introduce a BCAA intra workout supplement into your lifting routine when taking Wreckage to obtain max benefit.

This is the single ingredient that makes Musclepharm’s Wreckage a game changing pre workout to some, and a too hardcore pre workout to others. D-Aspartic Acid. This form of aspartic acid in the D conformation has been believed to stimulate testosterone production in men. This production has been most notably in men who have below average testosterone. So, the theory is that it promotes heightened testosterone in healthy men, as well as getting up to baseline and above in men who are below average. D-aspartic acid is a widely used supplement for increasing testosterone levels and many of our top test boosters include this ingredient.

Creatine HCl is the most water-soluble form of creatine known, with some studies suggesting that it is upwards of 10x more soluble than monohydrate. This is well needed, considering that it is exceptionally hard for creatine to completely dissolve in such a large serving size of other solutes. It is debatable as to how much of this creatine is able to be utilized by the body.

Agmatine Sulfate (500 milligrams) – Agmatine is commonly used to increase nitric oxide levels. This is cool, but the citrulline presence is already quite competent of excellent pumps. This leads us to weigh the benefits of Agmatine with the negatives, such as recommendations on examine.com to not take agmatine with creatine, d-aspartic acid, and l-citrulline.

Caffeine (350 milligrams) – Wreckage is a hardcore pre workout, so it’s only right that it contains a heavy energy matrix. The caffeine content, coming in at 350 milligrams (roughly 3 and ½ cups of coffee) brings that energy forward relatively effectively.

Summing up these Ingredients

As you can see, Wreckage is a powerhouse of a supplement. We aren’t going to lie, there are a few choices that we do not mechanistically agree with, but this did not stop Wreckage from improving our workouts in the gym.

Is Wreckage a Good Pre Workout?

Overall in the gym, Wreckage is intense. The caffeine and L-citrulline alone is in quantities high enough to earn new PRs. Then, considering what else is contained- well, think about it!

While taking Wreckage we lifted like beasts. Not perfect beasts, but hey, we are not going to complain too much. We’re absolutely sure a lot of guys are going to love Wreckage.

If there was one negative to point out, it’s the possibility of digestive issues due to D-aspartic acid. Perhaps you have taken D-aspartic acid in the past and experienced this, if so, it may happen again with Wreckage. Other than this, all you need to worry about is handling all that caffeine! If you can, all we can say is enjoy the gym!