PRO, Platinum, Gold Standard… Optimum Nutrition has a way with words and branding. However when you look at their formulas, they are surprisingly average.

What is unique about Optimum Nutrition is their dedication to safety.

ON is the last brand that you’ll see promoting the latest (and unverified) ingredient or ‘super supplement’. Instead, they take their time, upgrade products slowly, and ensure they never release something that could tarnish the name “Optimum Nutrition”.

This dedication to safety paired with quite frankly economy-level formulas has given us some pretty lame pre workouts in the past.

But before we get you overhyped, remember – this all comes down to your body, desired stims, exercise routine, and experience.

But if you’re tired of taking the same old C4, Ghost Legend, or other generic PWO on the GNC shelf… Then this is going to be a little bit of magic in a can that’ll keep you on track.

Jym Supplements, Transparent Labs, Kaged Muscle, Legion, and Cellucor have all successfully released large-serving clinically inspired pre workouts… Now it’s Optimum Nutrition’s turn with PRO PRE. In our opinion, this is the only Optimum Nutrition pre workout worth taking… How’s it stack up? It’s pretty awesome compared to the mainstreamers. However, it doesn’t deliver that niche super-stim feel that some want, and it also skimps on many ingredients that other large-serving pre workouts deliver.

Quick Weaknesses: Only 20 servings per container, a bit pricey, and could really use a BCAA matrix.

How to take PRO PRE: This pre workout kicks in relatively fast. Ten to twenty minutes before training is perfect. If you’re not used to 300 mg of caffeine, then start with half a scoop!

Three hundred milligrams of caffeine is no joke. Go back ten years, and that kind of dosing would be unheard of! But, previous pre workouts like Pre-Jym and others have proven this to be quite the sweet-spot for a large crowd. Especially when caffeine is the primary stimulant source. Overall, the energy experience we got from PRO PRE didn’t leave us feeling like anything was lacking. Yes, the nootropic / feel-good portion was a bit lacking, in comparison to other juggernaut pre workouts… But overall it was seriously good.

There isn’t any secret strength sauce ingredients in Optimum’s PRO PRE, but the ingredients at hand are effective all around and a good staple-point of pre workout supplementation.

The citrulline paired with beta-alanine does provide endurance perks. However, opting for straight leucine instead of a BCAA keeps this pre workout from ranking awesome in the endurance department.

The lack of questionable stimulants and inclusion of ashwagandha, l-theanine, and citrulline make this a pretty easy come-down. Well done.

There are several reports on other websites about this pre workout tasting really bad. We didn’t experience that in the slightest, in fact it tasted good and had a great composition. What flavor did we try? The strawberry burst.

This is in fact their best pre workout yet, but its too expensive for what you get… Compared to industry averages.

Compared to previous Optimum Nutrition pre workouts, we’ve got nothing but love for the new PRO PRE! However, in comparison to what pre workouts are best right now, it isn’t a star child like you’d expect from a brand so serious about their reputation. Will you be disappointed with PRO PRE? Likely not! It could always be worse, but hey, it could also always be better.

Ingredients in ON PRO PRE

The ingredients in this pre workout are pretty straight forward and without surprises. Here is a short discussion/explanation for each. 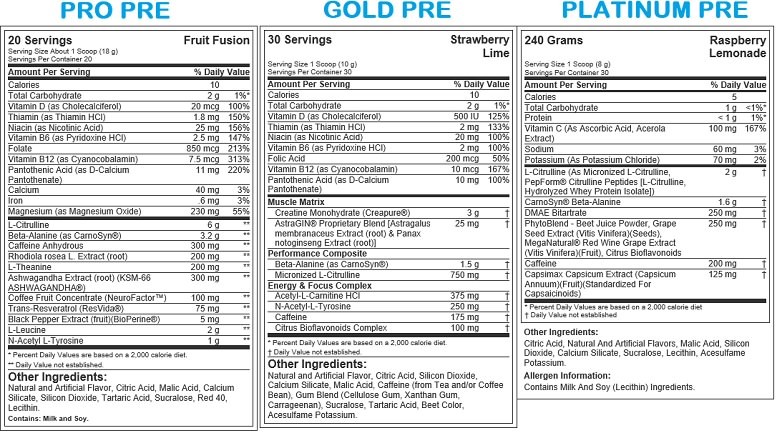 As you can see, PRO PRE brings forward the best-dosed formula to date (of their pre workouts at least).

Optimum Nutrition as a brand was never built up upon their pre workout supplements. Instead, its been their protein supplements and other ingredients.

However, now with PRO PRE, they are entering the game for real. Who knows what their next formulation will bring…

Let us know what you think…