Shadow-X is the stimulant big brother of The Curse, both made by the brand Cobra Labs. Currently, the brand produces 3 pre workouts, with the remaining product being named “The Ripper”, a fat burning pre workout.

Cobra Labs is decently popular, mainly due to all of their focus going to just 4 products over their last 8 years of business.

Yes that’s right, Cobra Labs was founded in 2010, and to this day stays content with 4 products.

So, is Cobra Lab’s Shadow-X pre workout any good, and, how does it compare to The Curse and The Ripper? We’ll cover that all in our cumulative review.

Shadow-X Quick Review: The main sauce in Shadow-X is without a doubt the 350 mg caffeine dosage. Since the whole formula is small, the caffeine hits very fast and hard. Likewise, while beta-alanine is dosed low, it hits fast as well stimulating massive tingles. Overall, this is a not-so-good tasting high caffeine pre workout. No pump or endurance… Pure stimulant energy.

Energy is the bread and butter of Shadow-X. With each scoop delivering 350 mg of caffeine per serving… You better believe that it hits pretty hard! Though, with this large dosage there is not any L-Theanine to curb the jitters over. Therefore, expect it to be extra intense and too much for some.

Note: Shadow-X contains significantly more caffeine than The Curse and The Ripper.

Besides the caffeine strength gains, you’re really not going to get anything else out of Shadow-X. Consider supplementing with creatine on the side, or adding in intra-workout supplements for actual enhancements.

Like the strength category, Shadow-X really isn’t going to help your endurance besides the caffeine blast. For greater endurance, consider intra-workout supplements to rev up Shadow-X.

For a large caffeine dose pre workout, the effects did wear off quite quickly. Most likely due to it hitting hard in the first place being such a small and direct formula. With that, and the lack of corollary stimulants – crash can be a bit more of a crash than you’re used to.

Since the formula is small and there really aren’t any added ingredients that taste bad, we really anticipated Shadow-X to taste good. However, it did not. Not at all actually.

Shadow-X really isn’t a special pre workout. But at the same time, its cheap and they do not make claims of being too perfect. Yes, they over promote the stimulant and hardcore nature of this product… but at least they are not claiming it increases strength or muscle gain like say, Muscletech is notorious for. With that being said, overall price and value is decent.

Summing it all up, Shadow-X is straight forward. Doesn’t taste too good, will give you energy, and isn’t gonna cost too much. Things could be worse, but they could also be better. 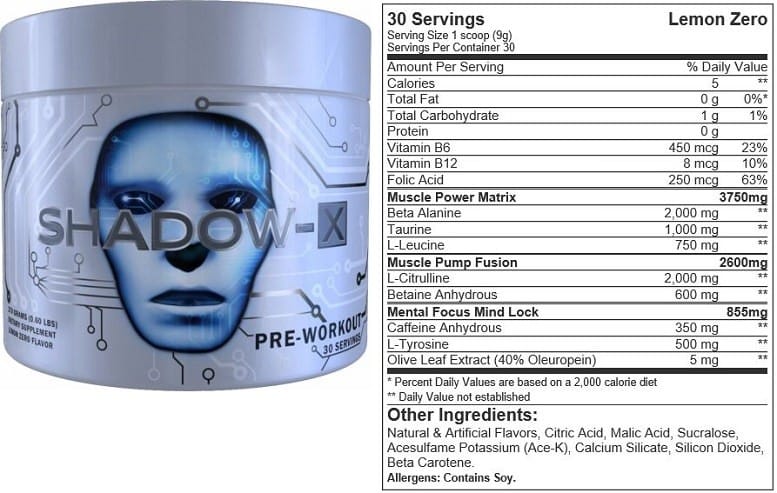 Olive leaf extract… What’s the deal with that?

Olive Leaf extract may increase thyroid hormones as well as improve carbohydrate metabolism. Though, its not entirely clear. At 5 mg, it may be completely pointless  as many studies used larger dosages. So, it may benefit energy, metabolism, fat loss.

If you are considering taking Shadow-X, then you’ve likely taken The Curse already. To us, Shadow-X is simply a more caffeinated version of The Curse with a few added ingredients.

Here you can see a direct label comparison between Cobra Lab’s 3 products: The Curse, Shadow-X, and The Ripper. 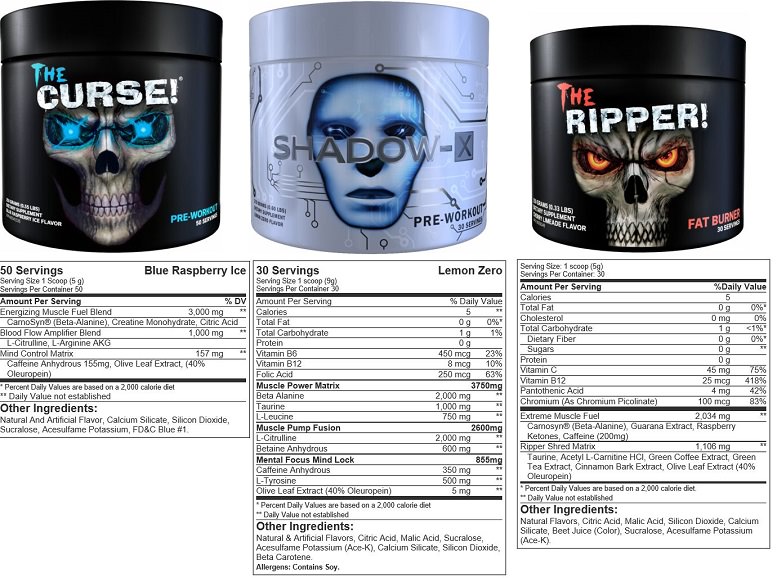 Which Cobra Labs pre workout is for you?

If you are looking for a low-stimulant cheap pre workout, then you can consider The Curse.

For a more caffeinated experience, you can take Shadow-X.

Instead, if fat burning is your goal, then you can take The Ripper.

This is all assuming that you are a diehard Cobra Labs fan.

Shadow-X adds a new level of caffeinating action to Cobra Lab’s product line-up. It isn’t anything special, like some of the ridiculous pre workouts we’ve tried lately, but its pretty honest costing only $30 for 30 servings. So overall, we cant hate on it too much besides the harsh taste.

Have you tried the Shadow-X pre workout? Let us know!