Cellucor has made many pre workouts in the last few years. In the beginning, they had C4 Extreme Chrome Series. This was a massive success, being a combination of caffeine, synephrine, and Arginine nitrate.

Next, there was N.O N-Zero Extreme. This pre workout was creatine free, and had massive focus thanks to vimpocetine.

But now, that’s all being replaced by Cellucor’s new pre workout line up, based on modifications to C4.

The original C4 and C4 Next Gen has been modified, as you can see in this c4 pre workout review.

Using this new C4 as a template, Cellucor has made 4 variations of C4 which include C4 Mass, C4 Ripped, C4 50X, and now C4 Neuro which we will focus on here.

Note: If you would like to see the new C4 Ultimate, Mass, and Ripped compared – view this Cellucor C4 Pre Workout Review of Original, Mass, Ripped, and Ultimate.

Before we bust into how C4 Neuro felt in the gym, we’re going to show you what’s in this pre workout and how that effects your body. After this, you can read our straight forward review for C4 Neuro based on our experience working out. 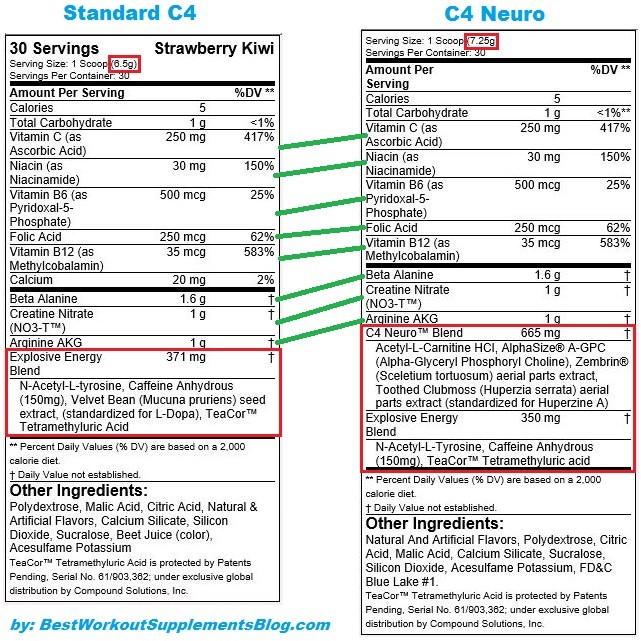 As you can see, the standard C4 and C4 Neuro are incredibly similar in formula. It’s the same beta-alanine dosage, same creatine, etc.

What separates these two pre workouts is the Nootropic blend added to C4 neuro, as well as the L-Dopa deletion from C4 Neuro. Besides that, the caffeine is the same as well as N-Acetyl-L-Tyrosine.

The Nootropics in C4 Neuro

The Nootropics that make C4 Neuro its own pre workout consists of a 665 mg formula with 4 ingredients. Below is a description of each one.

This is commonly referred to as ALCAR. Acetyl-L-Carnitine is a highly absorbable form of Carnitine that is useful for its ability to increase mitochondria output. This results in a natural energy sensation.

ALCAR in particular is effective at crossing the brain-blood barrier to deliver these benefits to your brain. Though, the recommended dose of ALCAR is 660 mg to 2,000 mg.

Alpha-GPC is trademarked AlphaSize, but it is not a muscle builder in itself. Rather, it’s a choline source which is believed to improve both cognitive power and physical power output. The recommended dose of Alpha-GPC to increase power output is 300 mg to 600 mg.

Zenbrin is a trademark of a Kanna plant extract. This plant has historically been used as a psychoactive compound as well as a stress reducer. The current clinical dosage is not known.

Huperzine-A is an effective nootropic as it prolongs the beneficial effects of choline. In the body/brain, Huperzine-A prevents the degradation of choline. The recommended dosage of this compound in miniscule and measured in micrograms.

As a whole, the Nootropic blend in C4 Neuro is interesting. Since the entire formula is 660 mg, some of the ingredients are largely under-dosed by default. However, while supplementing we felt a good effect. We will get into that now.

The whole premise behind C4 Neuro is that it’s meant to be a great energy and focus pre workout. In those regards, C4 Neuro Succeeded. The entire experience was clean, energized and focused.

This energy was present, and moderately strong – but not intense. Pre workouts like Stimul8 and Ion are still much, much stronger and intense.

But that’s ok, because we are happy with the level of energy C4 Neuro offers and chances are you will be too.

Pump, performance, and endurance wise – C4 Neuro really didn’t outperform. The real benefit to this pre workout is the focus matrix, and that’s what it rides on. If you want a great focus and energy experience, you will get it from Neuro!

However, the pump and endurance is going to be 100% from you. Which, isn’t necessarily a problem.

Bringing It All Together for Neuro

As a whole, Neuro is an effective, great tasting, energy pre workout. It’s not overpowering, but it will give you a great kick to power through your lift, and to actually want to lift.

It’s not the best by any means, but for the price and easy accessibility it’s going to stay a popular pre workout for quite some time.