I’ve been looking forward to reviewing Muscletech VAPOR ONE for quite some time. After all, back in 2008 Muscletech Nano Vapor was the first pre workout I ever tried. It had a massive serving size, and was loaded with stimulants and everything grizzly. Being my first pre workout, that stuff will always hold a happy memory for me.

I have reviewed every single Vapor pre workout by Muscletech since then.

Over the last 10 years, there have been about 8 formula changes to the once “Nano Vapor” and now Vapor One and Vapor X5 line.

This isn’t a surprise, as you can see that they do this with all of their products (Neurocore, Hydroxycut, etc). Really, it’s a marketing tactic.

Nearly every year, the formula has a new breakthrough that builds all sorts of hype. And as we all know, hype is good business. Though from a technical standpoint, the only thing that we’ve noticed is the formula sizes getting smaller and less complex (VAPOR ONE aside).

VAPOR ONE is a true Nano Vapor inspired pre workout. Just like the original, it packs more ingredients than you’ll find in any other muscletech pre workout supplement. While reviewing VAPOR ONE, the only cause for concern is the incredibly high level of caffeine.

Quick Weaknesses: Only 20 servings, and a more potent taste.

How to take VAPOR ONE: VAPOR ONE can be taken up to an hour before exercise. Since there is so much caffeine, it will last longer than your typical pre workout.

Unlike previous Nano Vapor versions, the new VAPOR X5 lineup delivers even smaller formulas for a quick energy hit to power through your workouts. Across the board, caffeine dosages are reduced along with pump ingredients, while yohimbe remains high. Overall, this is a down-grade in comparison to previous Nano Vapor products, which ultimately made VAPOR ONE a necessity.

Quick Weaknesses: Touted ‘clinical dosages’ are based off taking two servings (thus 15 servings per container). This is basically just an energy drink that comes in 3 variations, that’s it.

How to Take Vapor X5 Pre Workouts: I wouldn’t take any of the Vapor X5 pre workouts more than 40 minutes before a workout, since the stimulants are significantly less. 15 minutes before lifting would be preferred. For users not brand new to pre workouts, dosage doubling will happen rather quickly.

Vapor One 8.5/10 – Vapor One is loaded with caffeine, enough to ensure that you can power through any workout. This may be too much caffeine for some individuals, which calls Vapor X5 into play.

Vapor X5 6.5/10 – If you are new to pre workouts, then Vapor X5 and its variants will likely be an impressive product to you. However, if you are a standard pre workout user, then the 150-190 mg of caffeine per Vapor X5 serving isn’t going to cut it. In this case, you will be increasing to 2 scoops per serving, and thus 300-380 mg caffeine per serving. Only one small problem… You’re now taking in 50 mg of yohimbe and likely sweaty and jittery. For that reason, none of the new Vapor X5’s do well in our energy department.

Vapor One: 7/10 – Vapor One is formulated well for strength gains, and not just from the caffeine powerhouse. While taking Vapor One, we felt stronger than if we had not.

Vapor X5 5/10 – Across the board, there are not any significant strength boosters aside from caffeine and under-dosed creatine in Next-Gen and Neuro.

Vapor One 7/10 – As long as you can stomach the high level of caffeine and stay hydrated, Vapor One will allow you to lift harder and for longer. It is better than the average C4.

Vapor X5 5/10 – Caffeine comes and goes, and that summarizes Vapor X5 so well. Unless you re-dose mid workout, do not expect a true endurance boosting experience.

Vapor One 6.5/10 – Due to the huge caffeine blast, we did experience quite a bit of crash after workouts. This isn’t surprising, but certainly worth noting.

Vapor X5 7/10 – For all Vapor X5 formulas, a small dosage of L-theanine is included to smooth over the caffeine and create less of a crash. Though, it isn’t quite enough.

For this category, Vapor X5 Neuro out-performed the others with its extra nootropic ingredients. This essentially keeps your brain fed even after the caffeine begins to wear off.

While large mainstream brands tend to cut serious corners on product performance… They NEVER skimp on taste. While the flavors and sweeteners aren’t exactly natural, they are delicious. Both Vapor One and Vapor X5 impressed us.

Vapor One 7/10 – This is by far the most ingredient loaded pre workout made by Muscletech in a long time, but its still over-priced. Many clinical dosages are just barely hit, while servings are cut down to 20.

Vapor X5 6/10 – For a  low-stimulant lover, the price to value is more like 8/10 – since you are getting 30 servings for about $30. However for us, we had to double up servings to get a decent response, therefore granting 15 servings for $30. Previous Nano Vapor versions suited our needs better.

With the X5 line Muscletech has taken a unique product line, and made it basically run of the mill. Pre workouts similar to Vapor X5 include their primary competitor line: Cellucor C4.

Likewise, there is no denying the similarities between the Vapor X5 line, and other Muscletech brands like: Shatter SX-7 and Anarchy

However VAPOR ONE uniquely stands apart from the pack.

Overall, Vapor X5 Next Gen, Vapor X5 Ripped, and Vapor X5 Neuro didn’t quite give us what we were looking for. Vapor One on the other hand had a true call-to-arms for the caffeine lover – and we liked it. 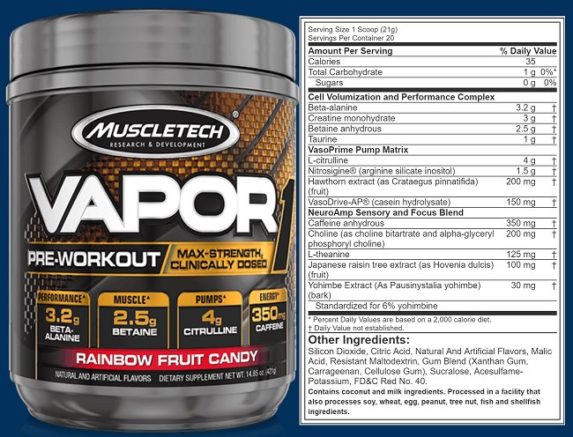 The Vapor One formula greatly surpasses previous Vapor reformulations that we’ve seen in the past. Our favorite part, is the true 3.2 gram beta-alanine dosage plus the 4 grams of l-citrulline malate.

We’re not necessarily fans of the huge caffeine dose, but it seems to work. 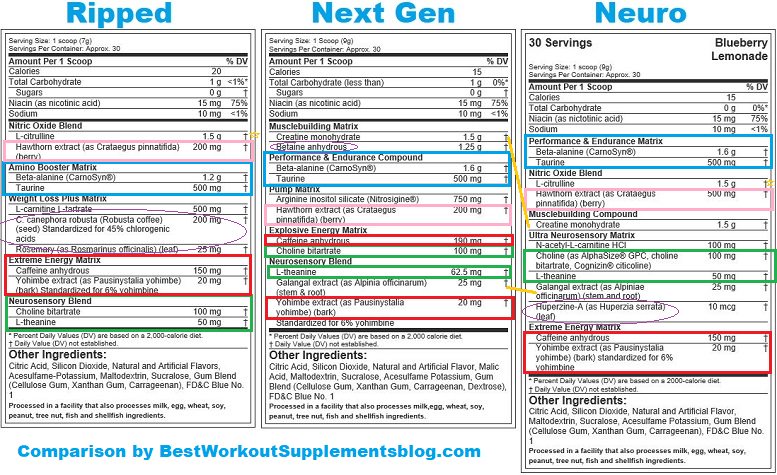 When comparing the ingredients across Vapor X5 Next-gen, Neuro, and Ripped – there are a few small differences hidden across very non-uniform labels.

So, what makes each product unique?

There are very small differences between each product. Between them all, we definitely prefer the Vapor X5 Neuro.

Something we didn’t like, is all the different “matrix’s” and “blends” that Muscletech categorized ingredients in.

If you dissect the labels and compare, you will find lots of random marketing BS jargon like this across all Muscletech products. These are mistakes that educated nutraceutical formulators DO NOT MAKE, so why is Muscletech making them?

Our Verdict on Vapor One, Vapor X5 Next-Gen, Neuro, and Ripped

Vapor One has definitely broken new ground for Muscletech and upped the ante. Vapor X5 on the other hand doesn’t have us as impressed as gym junkie supplement reviewers. When a new pre workout comes out, we expect it to be better, cooler, more effective… The Vapor X5 line isn’t any of that, it just has a “new” label on it.

For that reason, we label this as a beginner’s pre workout and leave it at that.