In this line, you get more ingredients, more caffeine, more power; to the point that not everyone will be able to even handle it! But that’s the point, and with that it’s safe to say with the same token that not everyone should be taking Hardcore Series supplements. A least for the incredibly caffeinated Wreckage pre workout. 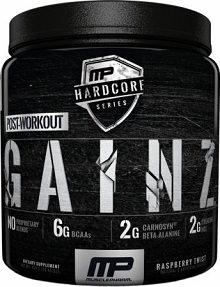 Gainz on the other hand is a brilliant post workout BCAA designed for bodybuilders. To us, it’s a reminder of Post JYM by Jym Supplements. But there are things about Gainz that Post Gym doesn’t have. Here, we’re going to take a serious look at Gainz by Musclepharm and lay out for you everything we experienced while reviewing Gainz.

As a whole, Gainz is a focus on muscle growth. This BCAA moves from the traditional 2:1:1 branch chain amino acid profile and instead goes for the 4:1:1 ratio. Given that there are 6 grams of BCAAs in every single serving of Gainz, you are getting 4 grams of leucine, 1 gram of valine, and 1 gram of isoleucine per serving.

But there is more to this cocktail than just the branch chain amino acids. With each serving of Gainz, there is also 3 grams of Glutamine, 2 grams of beta-alanine, and 2 grams of creatine HCl.

During the post workout window, these additions can greatly reduce muscle soreness as well as amply prepare for the next training session. Glutamine, is the most common amino acid in the body and thusly is a major contributor to muscle repair.

Beta-alanine, is the precursor to carnosine – which is greatly involved in fat metabolism as well as muscle endurance and fueling. And creatine, as you know is pure power for a bodybuilder or athlete; kicking in to get that extra bit more. 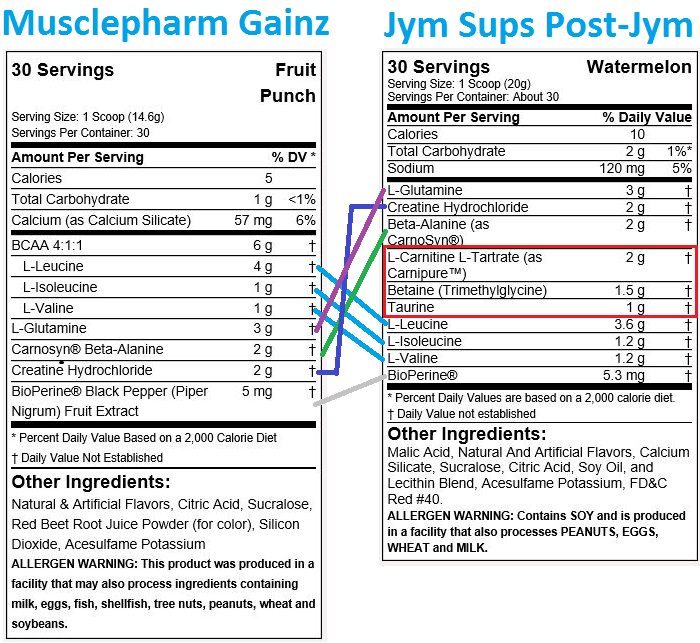 As you can see in this comparison, Gainz and Post Jym are impeccably similar. Even price wise, these two BCAA supplements for bodybuilders vary by mere cents. However, Post JYM does take the lead over Gainz. This is due to the extra ingredients outlined in the red box in Post JYM’s formula. These beneficial ingredients are not present in Gainz, despite the same exact price point.

When Musclepharm made Gainz as a part of their Hardcore Series, they had the right intentions in mind. It’s a solid formula, with key ingredients that should really help you out. Especially when paired with proper post workout nutrition via real food.

When you compare the two BCAA post workout kings – Gainz vs Post-Jym, Post Jym does take the lead due to extra ingredients. However, if the price is right on Gainz or if you are getting a Musclepharm hardcore series stack – still expect great results. Overall it’