We recently stocked up on Untamed Labs Ape Shit pre workout, and with it we locked in 3 bottles of Ape Juice Amped.

After taking this Amino Acid with energy blend for a few months, we’ve built up a solid opinion on how best to use Ape Juice Amped, as well as who it is and isn’t for.

Ape Juice Amped in a Nutshell:

Ape Juice Is: An energy booster, both via the caffeine and the amino acids.

Before trying Ape Juice Amped, we had a feeling that it was going to be just like Optimum Nutrition’s Essential Amino Energy. After taking it, we were right.

Take a look at the labels side-by-side: 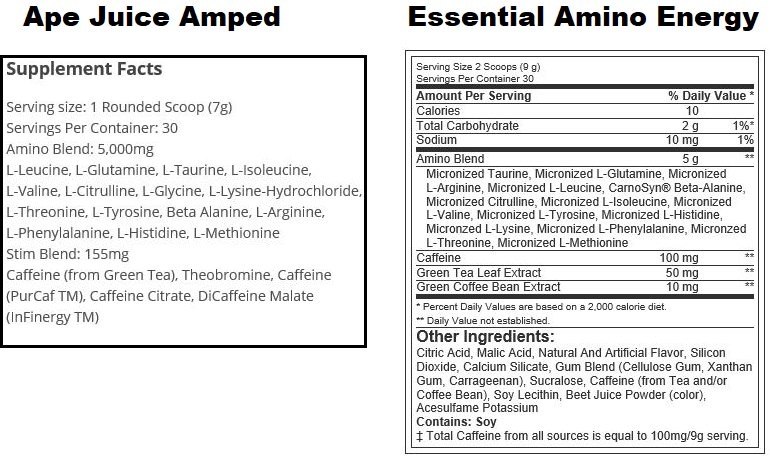 How You Should Take Ape Juice Amped

If you do want to build muscle: Then you’ll need to take at least 2 servings, which will also skyrocket the caffeine.

An alternative use: is just to use Ape Juice as a stand-alone cardio pre workout.

So, why is ape juice amped not impressive?

For an amino acid supplement to be functional, it needs to either deliver roughly 10 grams of amino acids, or it needs to deliver at least 6 grams of straight BCAAs. Ape Juice does neither of these two requirements… It’s purposeless besides an energy boost.

The amino acid blend above accounts for 5 grams of the Ape Juice formula… All those ingredients, 5 grams in total – that’s approximately 333 mg of each… In amino acid terms, that’s an utter joke.

The stimulant blend in Ape Juice isn’t too bad. This product would be phenomenally improved just by keeping this same stimulant blend, and doubling the amino acid content (while also bringing citrulline and beta-alanine up to 3 grams and 3.2 grams respectively).

We definitely hoped that Ape Juice would deliver a lot more than it did. However, at the end of the day – we got the stuff for dirt cheap. Literally like $14 a bottle… So who can complain that much?

But it does taste great and provide a modest, well-rounded kick of energy. That’s what you’ll be taking it for.

But if you’re looking to buy an AA/BCAA supplement for the holy gains, then spare yourself the disappointment and find a product that will actually work.

Have you taken Ape Juice Amped or its big-brother pre workout Ape Shit? Comment below and share your experience (good or bad).