Ever since MMA took off, the sponsoring brand Musclepharm has been a big name in sports nutrition stores (1).

The pre workout Assault is easily one of their most popular products, with applications across multiple workouts and sports.

It really is quite impressive that Assault has survived so long, considering back in 2012 it had to compete with pre workouts containing DMAA like jack3d once did in a quite dirty environment (2).

Though it lived on, putting safety concerns to rest while many other supplements dropped out (3).

Flash forward to today, and we have:

The times have certainly changed.

So how do these products compare to the old version you loved? Here we explain:

Musclepharm Assault and its new formula: 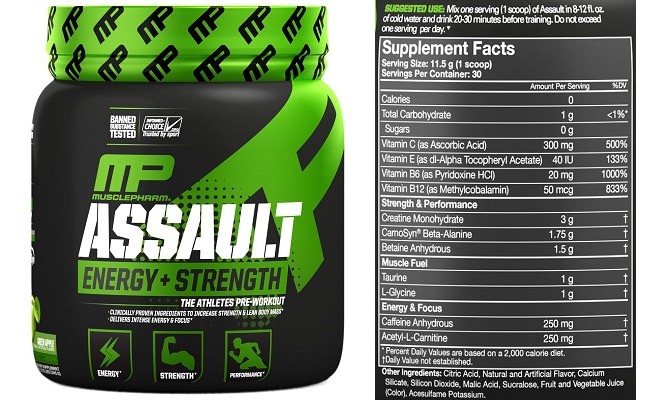 For starters it is absolutely essential to point out that the Assault we have today is nothing like its former formula.

Musclepharm basically took a ripsaw to the old Assault, taking a once ingredient-rich formula and making it into a small-dose shelf stuffer.

Take a look here for a direct label comparison of the new Assault vs old Assault pre workout: 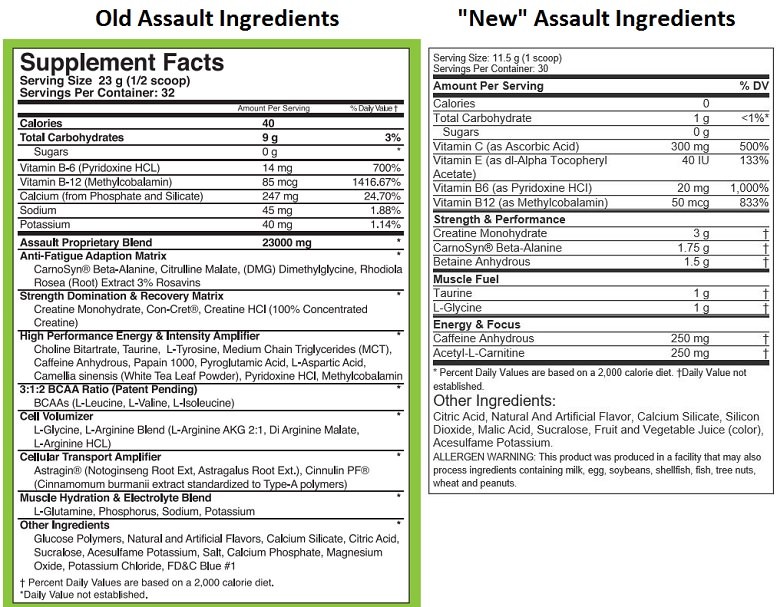 As you can see, quite a few ingredient cuts have been made:

We’re not a big fan of this reformulation at all, and apparently neither are collegiate athletes who attempted to improve performance with Assault to little avail (4).

In comparison, the old Assault formula showed promise for delaying fatigue (5) and improving performance (6), well, most of the time (7).

Basically, it looks like Musclepharm decided that they wanted their pre workout to be more like Cellucor C4.

So, how does Assault Black Label compare to this?

You read it right, while Assault Black costs about 34% more per serving, you’re only getting 0.1 grams more!

Perhaps the ingredients chosen save it, let’s take a look at a direct comparison between Assault and Assault Black: 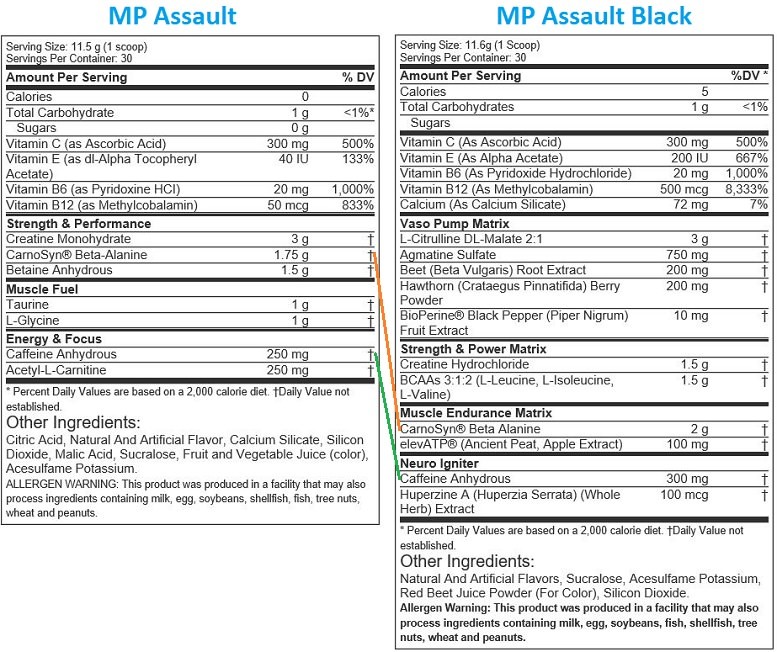 As you can see, while the serving size of each product are near-similar, the ingredient choices differ substantially.

If you are ingredient savvy, you’ve likely noticed that while the ingredient selection is good, the dosing is quite bad for: l-citrulline dl malate, beta-alanine, beet root, and branch chain amino acids.

Fortunately for Musclepharm, the new Assault Black formula appears to work, having increased performance via power output and energy in collage males (8).

How Assault and Assault Black Compare in the Gym

In the gym, both of these pre workouts will give you substantial energy to workout as long as you’re not accustomed to crazy high stimulant pre workouts.

Assault is really a creatine based pre workout, and you will notice a progressive increase in strength while you take it if you haven’t been taking creatine supplements already.

Assault Black on the other hand will offer creatine power thanks to its creatine HCL, but it will also have more energy from 50 mg more caffeine, plus some pump from the 3 g citrulline malate and 750 mg Agmatine sulfate.

Well, assuming the caffeine dosage and ingredient label are accurate which isn’t’ always the case (9).

Making a direct comparison between the two, we believe that they both fulfill the same purpose as energy and creatine providing pre workout supplements. One isn’t 100% distinctly better than the other. 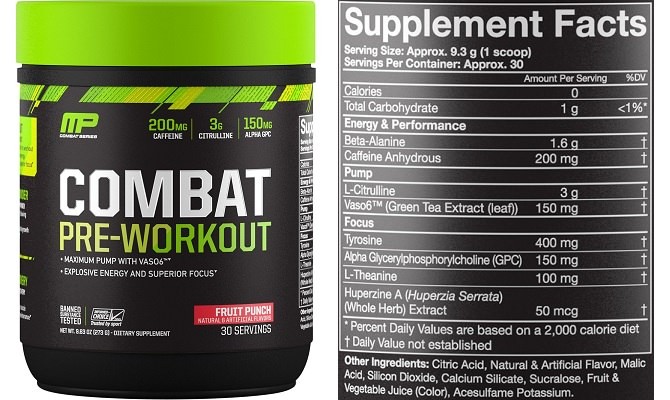 Viola, we have: Combat.
The most interesting thing about Combat pre workout, is that it contains l-theanine in the formula. L-theanine helps to well-round the caffeine experience, leading to a more blissful lift.

Compared to Assault, we would have to say that Combat takes the gold medal in trying to re-enact C4 by Cellucor. 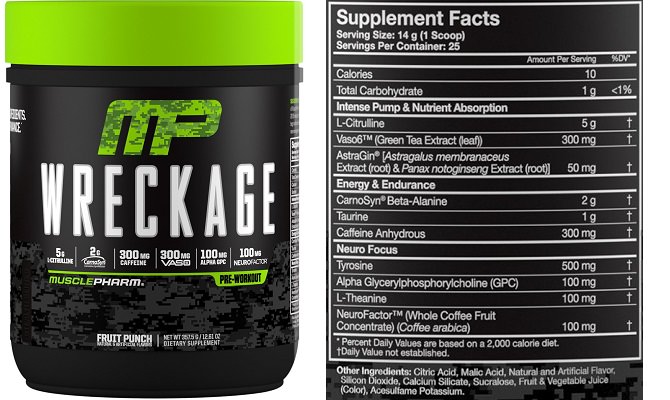 Musclepharm’s Wreckage goes beyond the standard Assault and Assault black formulas. Think of it is Assault Black, Deluxe.

If you’d like to see our full experience, read our entire Musclepharm Wreckage review to see what we liked and what we didn’t. 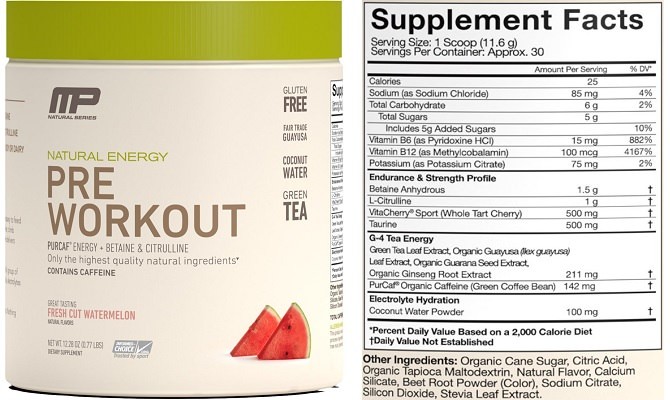 If you think less is more, then Musclepharm’s natural pre workout may be just the empty thing for you.

All for a whopping serving size of 11.6 grams (don’t mind the 6 grams of carbs).

What’s really interesting about this pre workout, is the stimulant matrix name: G-4. Does this remind you of any popular product, made by say, Cellucor?

Needless to say, we’re not fans.

Overall, these are great entry level pre workouts. They aren’t ‘extra special’ by any means. But for the masses, this is all someone really wants or needs – so we won’t bash it too much with our crazy high standards.

Overall we were pleased with both assault pre workouts, even though they are not as good as the original formulas. Currently, Assault Black is ranked on our best reviewed pre workout supplements.

PS: Comment below what you thought if you’ve taken any of these assault formulas. Likewise, let us know if you felt any stomach discomfort or nausea from them. This is something we are exploring.
Share 0
Pin it 0
Share 0
Share 0