Over 2016’s Black Friday the BWSB staff took major advantage of the sales going on over at A1 Supplements. Of that colossal purchase, a buy one get one of RedCon 1’s Fade Out sleep formula was included!

Before choosing to review Fade Out, we really didn’t know too much about it. In fact, we really haven’t received many emails/comments about RedCon 1 at all – so this was a complete shot in the dark.

But, we found RedCon 1 to offer a very interesting, unique experience. One that we liked certain aspects of, and are on the fence about others. 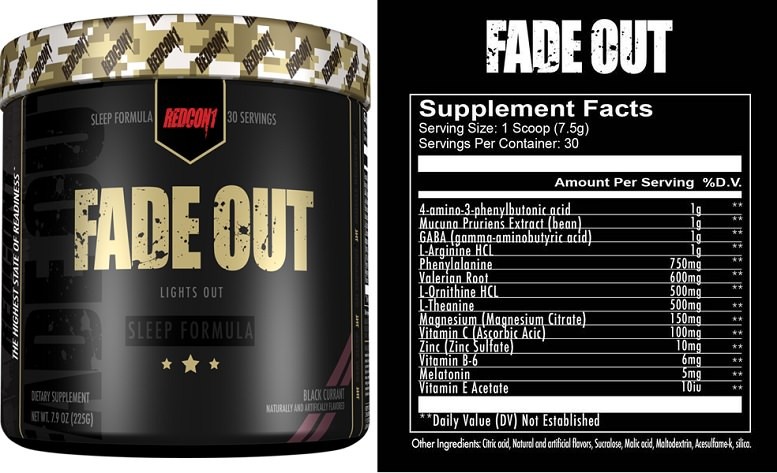 Redcon 1’s Fade Out has an expansive formula. Typically, in a pill based sleep formula you will find 2-4 ingredients totaling 500 mg to 2 grams per serving. Fade Out on the other hand has almost 7 grams of active ingredients… That’s massive!

The long name above is the scientific formula for the one and only Phenibut. Made famous by Russian cosmonauts in the 70’s, phenibut is often used as both a nootropic and relaxant.

More so, many people have cited using phenibut as an anti-anxiety aide when in social situations claiming that it gives them an edge.

In Fade Out’s application, phenibut is meant to help you to relax and fall asleep. Honestly it works quite well to do that. After you take Fade Out, you start to feel relaxed, good, and almost like you are under the influence of drugs.

There is only one problem here.

Fade Out uses 1,000 mg of Phenibut per serving in its formula.

Recommended dosages of phenibut range from 250 mg to 750 mg. Most phenibut warning labels specifically say to NEVER take any more than 1,000 mg at a time.

Fade Out uses this maximum dosage, which is a problem, because Phenibut is notorious for withdrawal symptoms after only a few times taking it at moderate dosages (source)… Not to mention at the maximum dosage.

This is a problem. In our opinion, this ingredient should be removed.

Mucuna Pruriens, also known as “Velvet Bean Extract”, is a common sleep aide/growth hormone aide supplement due to its high concentration of L-Dopa. L-Dopa, commonly made from l-tyrosine in the body, is converted into the neurotransmitter dopamine.

Dopamine, is important for the sensations of motivation, energy, and fulfillment. Symptoms of low dopamine include the opposites of these feelings – fatigue, lack of motivation, and depression.

GABA is a precursor to phenibut, and acts as a nerve signaling relaxer. While GABA acts this way, research suggests that ingested GABA is unable to pass the blood-brain-barrier to have these effects.

Arginine, a precursor to Nitric Oxide formation, is known for increasing growth hormone levels. Likewise, arginine’s nitric oxide stimulating ability may also increase GABA’s ability to permeate past the blood-brain-barrier, and have a greater relaxing effect.

Phenylalanine is an essential amino acid (not made by the body), which partakes in many bodily processes. To our interest, Phenylalanine helps upregulate dopamine, like GABA and phenibut.

Valerian Root is an age-old herb used to get better sleep. Additionally, valerian root is a popular product among lucid dreaming enthusiasts who seek to have more vivid dreams, and take control of their dreams.

We’ve read that part of Valerian Root’s MO is increasing GABA concentrations, which further leads to growth hormone release. But for now, it’s really not clear. All we know is that it definitely aids sleep.

Magnesium, may be the single handed most effective and ethical supplement for promoting better quality sleep. Nearly all Americans are deficient in magnesium due to their diets, and, this deficiency leads to increased stress and anxieties that reduce the ability to fall asleep.

Magnesium is also made popular in bodybuilding and athletics by ZMA Supplements which contain zinc and magnesium aspartate.

Melatonin, is a hormone that regulates the sleep cycle. At night, melatonin is made, and in the morning when the sun comes up, melatonin production ceases.

Typically, people take less than a milligram to 3 milligrams to promote a more restful night of sleep. Redcon 1 Fade Out contains 5 mg which is a much more intermediate/hardcore dosage that will definitely make you tired.

The efficacy of giving people 5 mg of melatonin is very questionable.

Our Experience with Redcon 1 Fade Out

Taking redcon 1 Fade Out before bed was a wild time. There is no denying that this product will make you tired. But, beforehand, it will make you quite loopy and provides a drug-like experience if you take it with a friend.

The first night that we took Fade Out, after 20 minutes, every talking topic became funny and our ability to move slowed down. After another 35 minutes, going to bed was mandatory.

After a few days, the ‘drug-like’ effects of Fade Out started to tone-down, but the sleep benefits continued.

Towards day 15 though, the benefits of Fade Out really began to ‘fade out’.

After that, we stopped taking the product, and immediately were faced with day-long headaches and what appeared to be withdrawal from this product.

After realizing that the first ingredient, 4-amino-3-phenylbutonic acid, was actually Phenibut – it all made sense. We were now experiencing withdrawal from high-dosage phenibut use, which typically takes 1-2 weeks of headaches, anxiety, and clouded thinking.

While this product DID HELP SLEEP, to us, it’s not worth taking. There are too many high dosages of ingredients that are KNOWN TO HAVE SIDE EFFECTS. With that being said, we wouldn’t recommend this product to a friend for nightly use, unless, it was only to be used once or twice a month, or, recreationally.