QuadraLean is a stim-free fat burner blend made by RSP Nutrition. In every 3 pill serving, there is a combination of CLA, Garcinia Cambogia Extract, Raspberry Ketones, and a carnitine blend containing: Acetyl L-carnitine, Propionyl L-Carnitine, and L-carnitine L-tartrate. This isn’t a huge dose, coming in at just under 2,000 mg per serving. But it is a wide array of different stimulant free options all combined into one supplement.

This serving size, in addition to the toned-down rate of effectiveness in stimulant free fat burners leads us to caution the fact that results can vary with this type of product. If you are on your game, meaning your diet is diligent and your workout routine is effective – you will lose more weight than if you were not taking a supplement such as QuadraLean. But, if you are not moderating your diet and activities – little to no benefits may be noticed. So, the ball is in your court.

While we took QuadraLean, we did moderate our diets and exercise aggressively. By doing so, as we normally do – QuadraLean did enhance fat metabolism. This was specifically noticeable in the abdominal region. 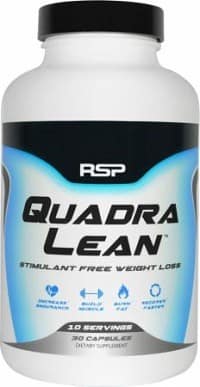 QuadraLean isn’t massive action supplement – but it is cheap, reliable, and safe. To take QuadraLean, you’re going to be taking 3 capsules twice daily in-between meals. The point is to take it on an empty stomach. Feeling wise, you’re going to have an energy boost if you are carnitine deficient. If you’re not deficient, it’s going to keep you from becoming deficient as you continue exercising.

Energy Boost for the Carnitine Deficient

One of our reviewers noted a noticeable increase in energy while taking QuadraLean. This is due to the high L-carnitine content in this supplement, which naturally increases metabolism. For the exceptionally healthy person, this boost will not be noticed as they already have peak carnitine levels. But, for the individual that doesn’t eat as well, or just started exercising hard – QuadraLean will make up for carnitine deficiencies which will help with energy and metabolism in a way that you feel.

Clarinol CLA (Conjugated Linoleic Acid)
Conjugated Linoleic Acid is a special “healthy fat” that has been strongly suggested to aid in body fat metabolism. Specifically in the abdominal region. Clarinol CLA is contained in QuadraLean which is considered one of the highest standards in conjugated linoleic acid production. You can read all about CLA in Clarinol’s FAQ via Clarinol.com.

Garcinia Cambogia
Garcinia Cambogia is a common food additive that has recently been suggested as a satiety and weight loss herb. This is achieved through an enzyme in Garcinia C that reduces fat formation to some degree, as well as the satiety effect that Garcinia C can produce. Both are still relatively unproven.

Raspberry Ketones
Brought on by the Doctor Oz craze, Raspberry Ketones was and still semi-is a weight loss fad ingredient. It has been believed to be an effective fat eviscerating compound, but this has only been proven in lab models using very high concentrations that cannot be reasonably achieved in humans. We would prefer this ingredient not be included, but besides it, the rest of the formula is very solid. 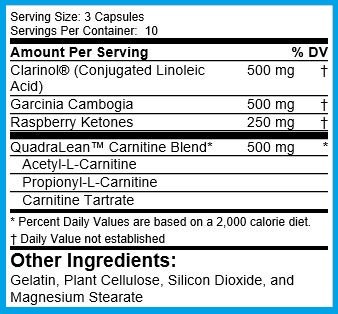 L-Carnitine Blend – Acetyl-L-Carnitine, Propionyl-L-Carnitine HCL, and L-Carnitine L-Tartrate
L-Carnitine is the most important component of QuadraLean, and in this formula you will find 3 different L-Carnitine variants. Each one, benefits your mitochondria by improving their ability to participate in cellular respiration as well as protecting them from aging-related damage. If you are deficient in L-carnitine, supplementation will have a major energizing effect on you! Otherwise, supplementation will keep you at peak levels and maintain your fat burning efforts.

As you have already deduced, QuadraLean is a decent addition to any weight loss protocol. It’s not the strongest fat burner on the market, but it is safe and reliable. In addition, QuadraLean will stack well with other weight loss and performance supplements without any interference. Below you can tell us about your experience with QuadraLean or ask any questions you may have.