We reviewed the new thermogenic by ErgoGenix called ErgoCut and have a lot of good things to say about it. In comparison to many other fat burners out there, ErgoCut is towards the top of the charts. There are many reasons why we’ve come to this conclusion and that’s why we recommend this fat burner so confidently. Lets now go over why this thermogenic is better than 98% of all other thermogenics out there.

As a whole, thermogenics have gone through an interesting transformation. First, we had straight caffeine. Then, we had ephedrine which worked great but messed people up. After that, we had a very, very long phase where all thermogenics were ok, but not as good as ephedrine. Well, now the time has finally arrived. The new fat burners out on the market are definite ephedrine competitors and ErgoCut is most certainly one of them.

What makes it better though is that ErgoCut doesn’t compete with ephedrine by playing ephedrine’s game. Not at all. While supplements like the old ephedrine absolutely bum-rush your adrenal glands in an effort to burn fat; ErgoCut takes a full spectrum body approach. Instead of causing adrenal fatigue and causing damage to your system by heavily stressing one pathway past its limits; ErgoCut diversifies the fat burning experience to co-align with your body’s natural affinity for burning fat. It sounds fancy, but it makes a great deal of sense. So much that we are going to gently explain it for you after these quick facts. 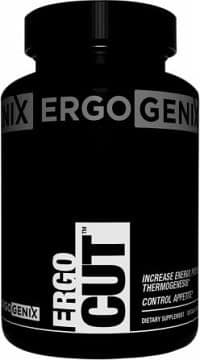 The process by which the Thermogenic ErgoCut burns fat isn’t novel, but it certainly is impressive and formulated in a mindful way. Below are the ingredients that you will find in ErgoBlast. We have grouped each ingredient by general class and will explain co-relations as much as possible so you can better understand this thermogenic supplement.

Dopamine up-regulators – ErgoCut upregulates the production of dopamine in the body via straight L-dopa from Mucuna Puriens as well as two forms of tyrosine. The two forms of Tyrosine are L-tyrosine (167 mg) and N-Acetyl Tyrosine (500 mg) which when added to Mucuna Pureins totals 767 mg per serving, making dopamine up-regulation the largest component of this thermogenic supplement. The increased production of the neurotransmitter dopamine results in greater cognitive alertness and stress reduction which helps prevent cortisol (the stress hormone) as well as increases quality of sleep at night and growth hormone release. This combination supports both the continued metabolism of fat as well as the maintenance of lean muscle. Tyrosine is present in both its standard L-tyrosine form (167 mg) as well as N-Acetyl Tyrosine (500 mg) which is significantly more water soluble and easier to uptake into the body.

Caffeine – The most prominent ingredient that you will be feeling while you take the thermogenic ErgoCut is caffeine. As a whole, caffeine goes farther than just helping you stay awake. Caffeine has been found to improve focus, promote fat metabolism, and reduce the ‘feeling’ of effort required to do activities like weight lifting. In ErgoCut, caffeine is present as both Caffeine Anhydrous (200 mg) and Guarana Seed Extract (7 mg). It is believed that there are also other thermogenic properties to guarana aside from its caffeine content, but we have not confirmed this to certainty.

Acetylcholine up-regulators – Sulbutiamine (125 mg), Acetyl L-Carnitine (200 mg), and Huperzine 1% (3 mg) all promote the up-regulated production of the neurotransmitter Acetylcholine. Acetylcholine in turn produces stronger muscle impulses and greater mental clarity and mental power. This will empower you to move more throughout your day and get more work done. Sulbutiamine promotes the physical uptake of acetylcholine into your hypothalamus, Acetyl L-carnitine provides the Acetyl group for linkage with choline to form the neurotransmitter, and Huperzine helps prevent the degradation of acetylcholine allowing for longer lasting benefits. 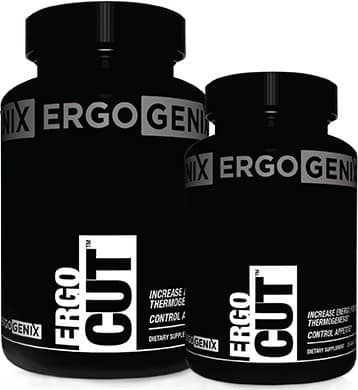 Co-Q10 (33 mcg) – Helps to increase your vascular oxygenation threshold, and in our experience reduces cramping.

Thermogenic fat burners don’t always work for me or fit into my life. I’m an incredibly busy guy and I’d like to think that I function at a very high and intense level of efficiency throughout my day. I attribute a lot of that to ‘eating for success’ and getting plenty of exercise to keep me in the zone. Because of this, you can probably predict how thermogenics can be hit or miss.

I’m not going to lie, I’ve taken a lot of bad supplements during my constant improvement towards a more perfect physique. I’ve taken supplements that didn’t do a thing, supplements that hit way too hard and ruined my ability to think clearly, and I’ve taken thermogenics that have hit hard and then caused a massive crash near after. ErgoCut does not fall into any of those negative categories. In fact, I was very, very impressed.

There is a good serving a caffeine in ErgoCut which is something you will find in nearly every fat burner, but what you won’t find is the intense acetylcholine complex. That complex, paired up with theobromine literally put a kick in my step and a very, very utilizable mental clarity boost that will make anybody’s day.

The energy boost and mental boost that I received from ErgoCut stuck with me through the entirety of the day until about 9 pm when my body naturally begins to wind down. At that point, I got tired, and when I slept – I slept very well thanks to the elevated dopamine levels in my body via tyrosine and Mucuna Puriens.

How ErgoCut Affected My Workouts

I was still able to take stimulant pre workouts while taking ErgoCut, but that may vary person to person. While in the gym, I looked a lot more ripped and cut than normal. I attribute this to a slight drying effect caused by ErgoCut which looks very aesthetic. My lifts were strong, but slightly less powerful due to the thermogenic upregulating my metabolism throughout the day. This is to be expected whenever you’re producing a net caloric loss.

ErgoCut did not negatively influence my lean muscle mass in any way. In fact, I believe that my dry mass increased as normal while my body fat percentage decreased. All in all, ErgoCut is a great fat burner that worked with my intense schedule, kept my lifts going strong, and allowed my body to keep gaining lean muscle all-the-while burning the fat down to a more attractive level.