Rainmaker is Axis Labs newest pre workout, succeeding Sma5h which was brought to us a few short years ago in 2013. Compared to Sma5h, Rain Maker has a few similarities, but the core of the pre workout has changed.

On their website, Axis Labs say that they made rainmaker to be a well-rounded pre workout that calls to action all components of pre workout nutrition, not just energy.

They describe what’s going on with most pre workouts in comparison to rainmaker as follows: 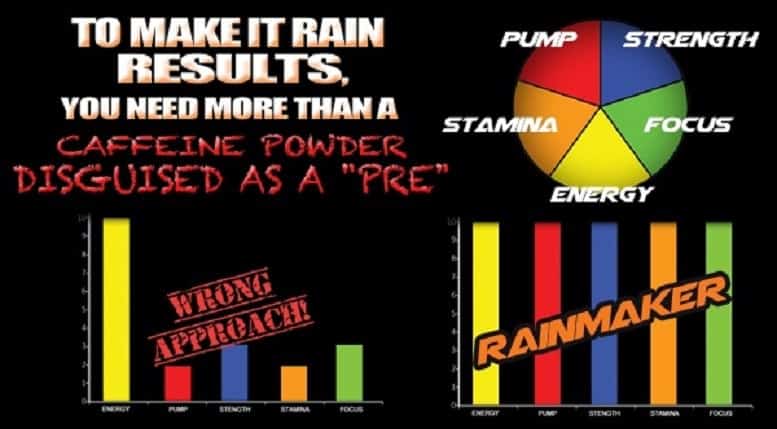 As you can see, they are claiming that most pre workouts ride their stimulant complexes alone and do not contain any real pump, strength, or endurance ingredients.

In comparison, they state that their pre workout touches equally on all components.

To take things a bit farther, on their bodybuilding.com product page they say that Rainmaker was made because they are tired of needing to add other supplements to pre workouts in order to get a full effect…

Right before they advertise stacking rainmaker with HemodrauliX… No comment.

That’s some credibility, considering that these patented ingredient makers are considered to be the ‘highest’ quality. At least, they say that they are as they patent troll the use of specific ingredients for the purpose of sports nutrition.

As we describe in our Beta-Alanine Review Guide, this ingredient converts into l-carnosine in the body which buffers lactic acid build up. The buildup of lactic acid hinders performance, and therefore, supplementing with beta-alanine promotes exercise endurance.

The clinically effective dose of beta-alanine ranges from 3.5 grams and higher.

MagnaPower Creatine is creatine bonded to chelated magnesium. This form, is touted for better uptake by the body. For a pre workout supplement, utilizing a form other than monohydrate is a good thing, being that creatine monohydrate has a rough time uptaking with large quantities of caffeine.

On MagnaPower’s site, they used 5 grams creatine for their studies.

Nitrosigine is a pretty cool version of arginine, being a compound containing arginine and silica. From their research, this version of Nitrosigine arginine uptakes into the body much more efficiently than regular arginine.

So far, we have yet to find clinical dosages for Nitrosigine as its cited studies on the Nitrosigine website cite rat models.

Glycerol is another popular pump ingredient much like Nitrosogine. Hydromax, made by Glanbia, is considered to be the purest form.

On Glanbia’s website, they reference this article suggesting 700-2000 mg glycerol.

In our opinion, the Performance Pump and Strength complex in Axis Labs Rainmaker is weak… Given that not one ingredient reaches clinical threshold per single serving.

That right there is the kind of formula that we like to see in a pre workout (for its stimulant department).

The biggest mistake a pre workout can make, is only having caffeine in it for stimulants… Many times we see a fantastic pre workout formula, with giant clinical doses, but then we get to the stimulant part of the label… And its 350 mg caffeine and nothing else.

That, is going to be a bad experience… And Axis Labs doesn’t make that mistake with Rainmaker.

Rather, they use a bona fide comprehensive stimulant matrix that covers all bases and offers a great experience that straight caffeine can never match.

Axis Labs Rainmaker in the Gym

I know that by now you want us to get straight to the point, and tell you how this pre workout affected us in the gym…

We took Rainmaker over the course of 2 weeks, the first week at single serving dosages and the second at 1.5 like the ‘make it rain’ label suggests. 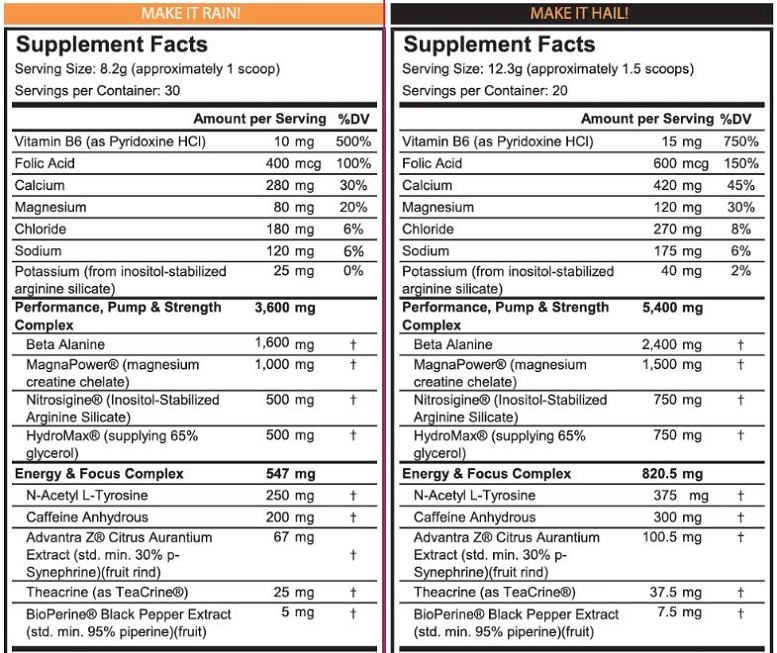 The first week with Rainmaker was good. Pump wise, really didn’t notice anything. Same story with endurance and power. Pretty much, all of the effects from this pre workout were clearly stimulant based.

The second week, things heated up with the extra 50% serving size. Energy was absolutely off the chain… So much energy. But, there was a consequent crash at the end of lifts.

While lifting though, there as a pump at the 1.5 serving dosage. We wouldn’t compare it to a 6 gram citrulline malate pump, but it was a veiny appearance pump.

If you want a good tasting, small serving, energy rich pre wokout, this is it. It absolutely meets those needs.

However, if you want a great clinically dosed pre workout that does increase endurance, strength, and has a really good pump… Rainmaker may not be the ticket.