Alani Nu Pre Workout is subtly decorated to appeal directly to women in tune with the rest of the Alani supplement line. Coming in several different flavors this pre workout is extra enticing, too. This had us wondering – what do the ingredients look like? Honestly, pretty good. Let’s take a deep look.

About the Alani Nu Brand

Alani Nu was founded in 2018 by the fitness influencer couple Katy Hearn and Haydn Schneider. While both their reputations grew, each become increasingly faced with “what should I take” questions from their followers who trust them.

According to the Alani Nu website, neither Katy or Haydn felt comfortable recommending supplements that they couldn’t completely stand behind through and through. This led them to create their own line, hype-free, based on the principles that matter to them. 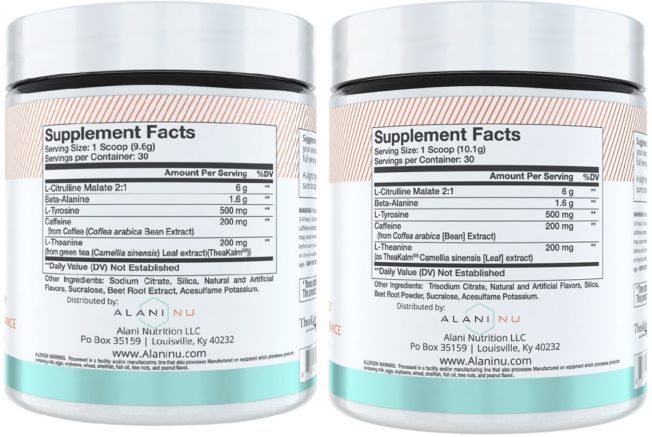 The principles of a supplement brand can always be validated based on the ingredients they choose to use in their products, and how they disclose them. Alani Nu’s pre workout is quite straight forward, yet hits hard on the points that matter. Let’s take a look at each ingredient.

A true keystone pre workout ingredient, l-citrulline malate improves both circulation and energy. Together, this boosts pumps and prolongs workouts. The 2:1 refers to the ratio of l-citrulline to malic acid (malate). In this formulation, there is roughly 4 grams of l-citrulline and 2 grams of malic acid. We like this dosage.

Extremely common in pre workout supplements, beta-alanine prolongs performance by negating the acidity rise caused by exercise. The dosage of 1.6 grams isn’t necessarily the most clinically valid. However, since women in general weigh less than men, a 1.6 gram dosage for women may be comparable to the 3.2 gram clinical dosage for men.

Supplemental l-tyrosine boosts the mood and can improve workouts time and time again. 500 milligrams is a good compliment to the caffeine and l-theanine, well-rounding the experience.

The Alani Nu pre workout formulation isn’t meant for double-scoops, its formulated to be just right. A caffeine dosage of 200 milligrams definitely hits the sweet spot for the majority of lifters, especially considering the other ingredients aren’t going to dilute down the rate of absorption. The caffeine used in Alani Nu’s pre workout is sourced from arabica bean coffee extract.

Any pre workout worth its weight in salt is going to contain l-theanine, and Alani Nu does not disappoint. This pre workout contains a 1:1 ratio of caffeine to l-theanine, which means energy will be smoother, more focused and without the panicky effect that some high caffeine beverages can produce. The l-theanine used in Alani Nu is trademarked TheaKalm from green tea extract.

Other Ingredients at 1.6 grams includes:

Consisting of natural flavors, silica, sodium citrate, sucralose, turmeric extract, acesulfame potassium and beet root extract. The Alani Nu pre workout formula is free of artificial colors and flavors, however, they do use sucralose as their sweetener. This is likely less than a gram though, which is far less than other brands, but still not zero.

Bottom line: The Alani Nu pre workout formula is clear cut, honest, and intelligently designed. There aren’t any hype ingredients, nor are their hidden dosages. All we have here are 5 proven winners without all the artificial junk other pre workouts often contain.

Effectiveness and efficacy compared to competitors

While taking Alani Nu Pre Workout, our team had zero complaints. It tasted far above average, delivered clean and well-dosed energy, and the pump was real. Overall, this is the kind of pre workout that will reward you time and time again if you are taking care of your body. Really, Alani Nu is similar to a women’s version (or simply alternative) to KinoBody Octane which follows a similar path with less caffeine.

Comparing Alani Nu pre workout directly to other women-focused pre workout supplements, Alani Nu really does come in towards the top. The sad truth is that competitors like Chick Pump, PowHer, etc. are all questionable in quality and over-advertised. Cira Nutrition is a newly-launched, worthy adversary to Alani Nu. The Cira Pre Game pre workout is a seriously stacked pre. We recently tested the flavors, and they are on a whole other level. We like to see that both Cira and Alani take a humble and confidence-strong approach. We notice this, and can’t get enough of the high morals present in a low-moral industry.

Its quite clear already that we have a lot of appreciation for Alani Nu pre workout, for its formula and even more-so for the brands philosophy. Sure, Alani Nu may not be the most ingredient-packed, or highest performing pre workout out there… But it is clearly one of the most honest, period. The formula well effective enough without the garbage, period. And these simple principles are worth supporting, especially when they come in delicious unique formulas.